Enter your City name or Pincode

Located in the Paschim Medinipur district of West Bengal, Kharagpur city is an important industrial, educational and commercial hub. It is home to diverse, multi cultural and cosmopolitan population and is thus one of the most populated cities in the state of West Bengal. Its pleasant climatic conditions and the presence of a plethora of tourist attractions and picnic spots in and around this city have made this a popular tourist destination. Its proximity to Kolkata, the capital, availability of labour and raw materials have promoted the setting up of numerous industrial units and establishments in and around this city. Thus to cater to the needs of the residents as well as the visitors, a well-defined and systematic network of transport and communication has been set up in the city of Kharagpur, making it easily accessible and well connected to major cities by air, road as well as railways.

The Kharagpur railway junction was set up in the year 1898-99. Rightly called as ‘Gateway to South Eastern Railway’, the Kharagpur Railway Junction is said to be one of the busiest railway junctions in the South Eastern Railway Zone, after Howrah. It has the third longest railway platform in the world. About 275 trains, including freights, pass through this station on a daily basis. Thus in order to reduce the crowd in Kharagpur, it has been decided to develop Hijli as an alternative station for Kharagpur.  Other stations at Kharagpur include those at Giri Maidan, Nimpura and Kalaikunda. 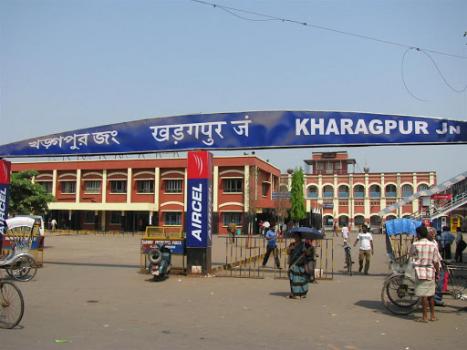 As the city of Kharagpur does not have its own airport, the Netaji Subash Chandra Bose International Airport at Kolkata is the airport nearest to this city. This airport is located at a distance of about 137 kilometres from the city of Kharagpur and it takes approximately around two and a half hours to reach there. Formerly called the Dum Dum Airport, this airport serves not only the city of Kolkata but also the adjoining areas, and is thus one of the largest and busiest airports in the state as well as the entire country. Apart from countries like Bhutan, Bangladesh, China, Southeast Asia, there are regular flights to Indian cities like Mumbai, Patna, Delhi, Ahmedabad, Bengaluru, Ahmedabad etc and other North Eastern states via leading airlines.

Kharagpur city has a well-developed and systematic network of roadways. This city is well connected to all important nearby places by road ways and the NH-6 (Bombay-Kolkata Road) passes through this city. The Kharagpur Central Bus Stand is located near the Kharagpur Railway station and has regular buses at frequent intervals to places like Tarakeswar, Rohini, Kolkata, Digha, Jhargram, Tatanagar, Gopiballavpur, Dhumsai, Siliguri, Haldia, Bankura, Durgapur, Asansol, Keshiyari, Baripada etc.

Cars, auto rickshaws, tourist cars and buses and private vehicles form the major means of communication within this city. Share auto facilities are also available for those looking forward to travelling at lower fares. Private travel agencies offer bus and taxi services for sight-seeing and commuting within and around this city.

Are you a Business Owner?

Add the products or services you offer